Oedipus’ power and confidence as a King is clearly shown through his tone in this quote. The first sentence depicts Oedipus’ strength as a leader. He states, “you have me to fight for you”, he emphasizes “me” indicating that he is much apart of this problem as his people are. He will be the one to solve this issue, just as he solved the riddle of the Sphinx. He describes himself as “Apollo’s champion” which shows his pride for himself-he believes that because he mentions Apollo to the people of Thebes, they will believe that Oedipus has the same power Apollo does. However, Oedipus sounds very convincing when he states firmly, “I’ll rid us from this corruption”. He displays responsibility for the city and takes this issue into his own hands by reaffirming the people that he will bring balance to Thebes. 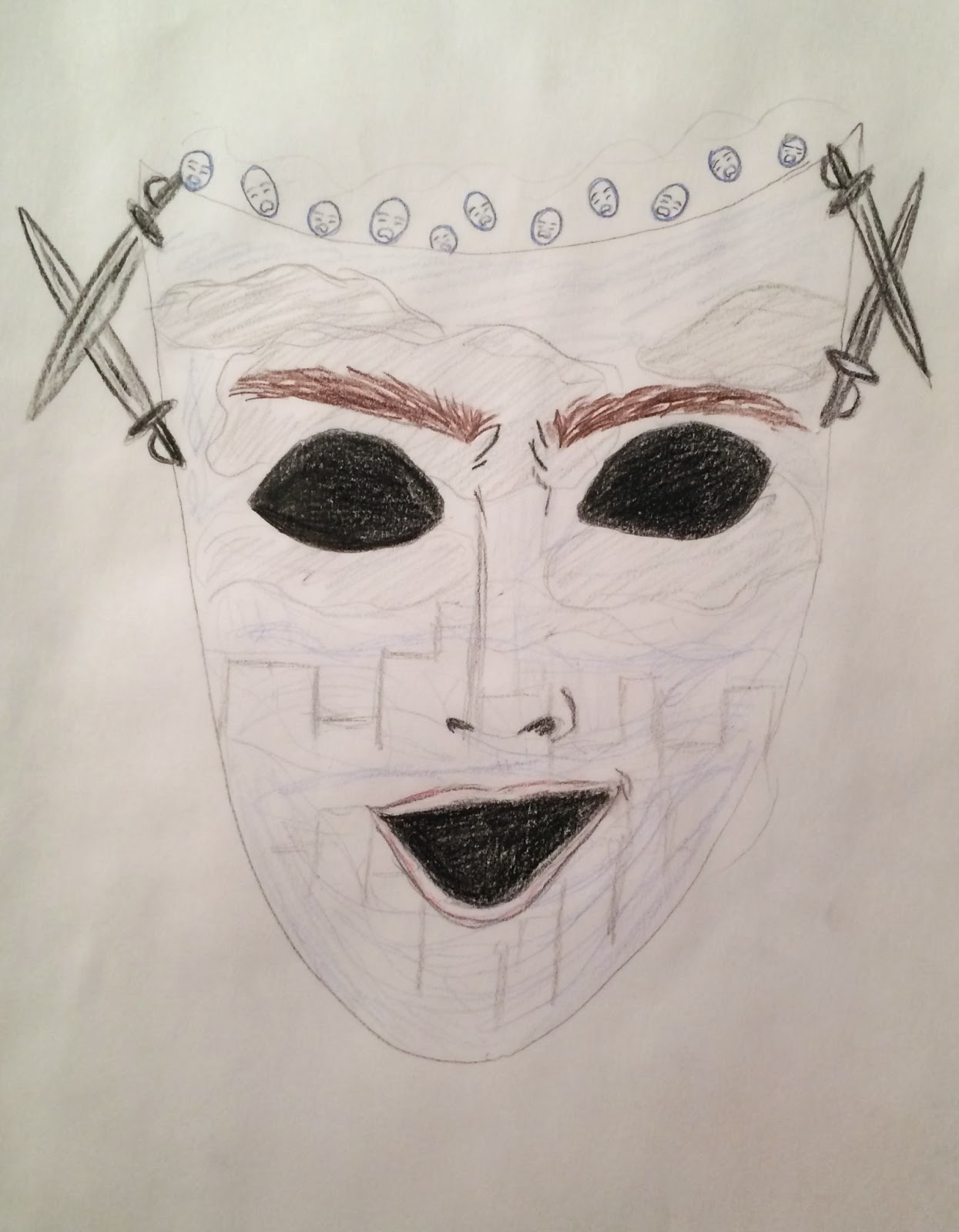 Oedipus is shocked that Tiresias wont reveal the truth to him. Oedipus views himself as powerful king, which ultimately makes him believe that he is able to have everything he asks for. When Tiresias says, “You bear your burdens, I’ll bear mine” he explains that he does not intend to reveal the truth to Oedipus, that his business is his, and Oedipus’ business is his own- ultimately saying that Oedipus should respect his choices. He specifically says “burden” because to emphasize the idea that revealing the truth will be misfortunate. Obviously, this does not settle well for Oedipus. He begins by saying he is surprised and unsettled by what Tiresias has just said to him. However, when he says “…unfriendly too to the state that bred and reared you…” it evokes a sense of anger. Tiresias had grown up in Thebes and he was cared and supported by everyone and to not use his power to help the “state” reveals a sense of disrespect towards Oedipus and Thebes. 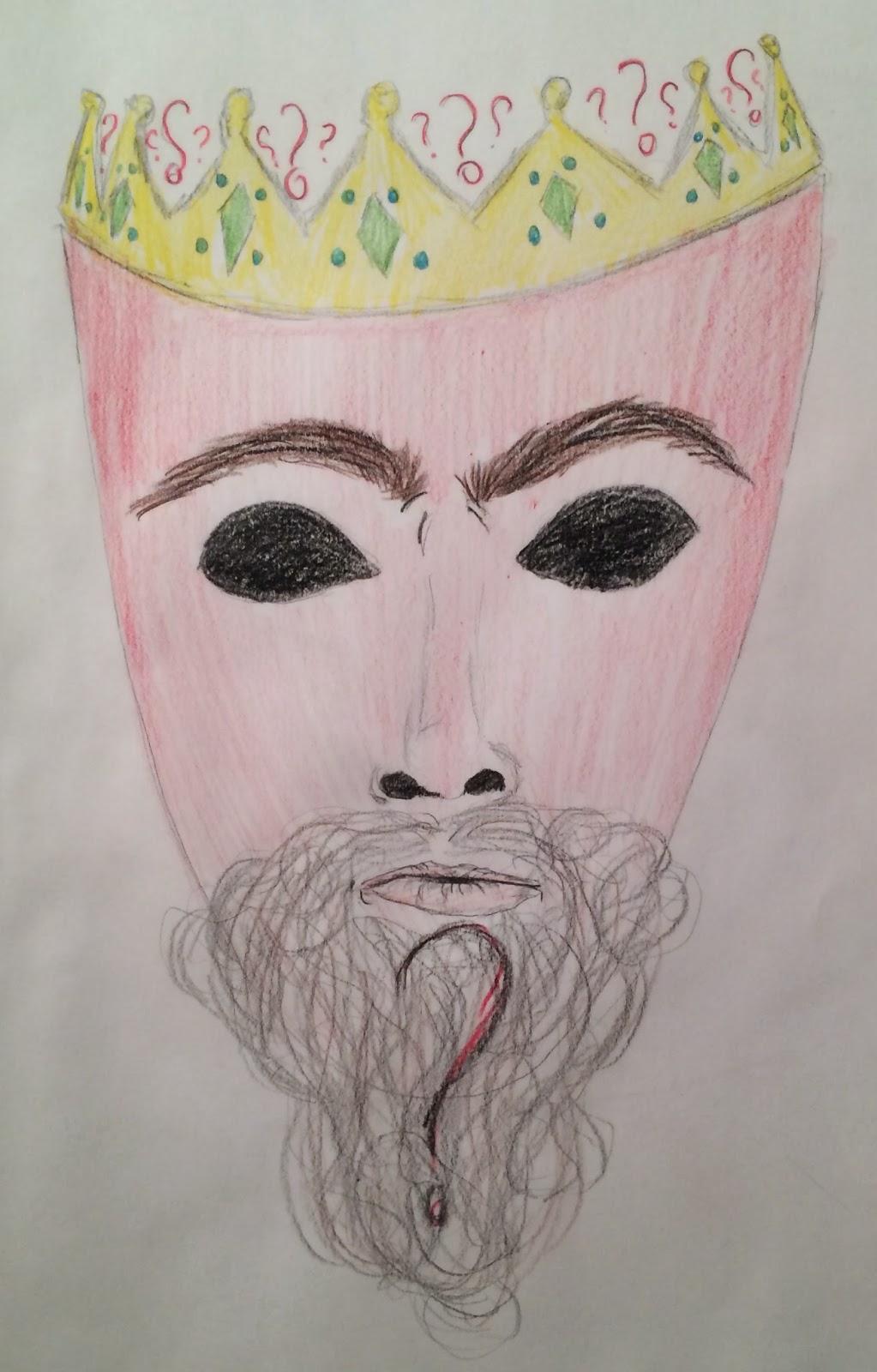 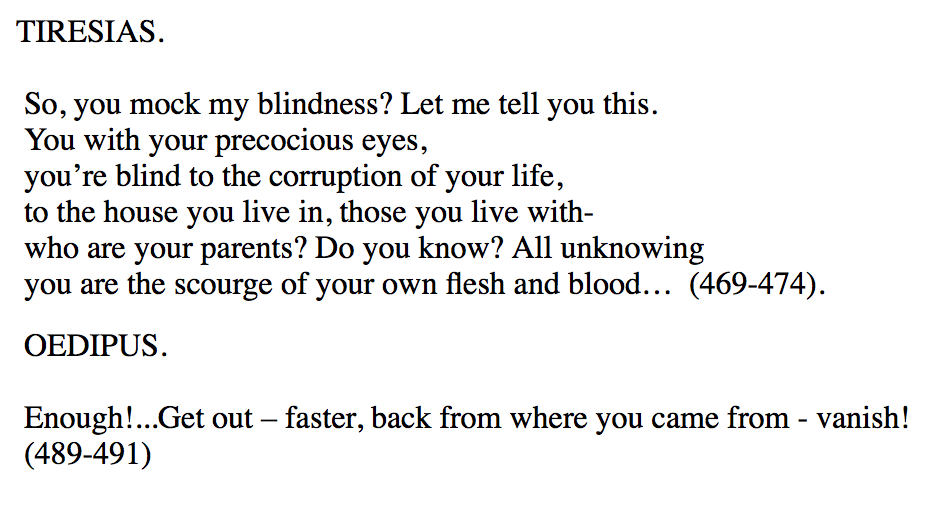 Tiresias begins by asking a rhetorical question, and quickly points out the faults which Oedipus faces. He sounds very condescending throughout, especially when he states, “you with your precious eyes, you’re blind to the corruption of your life”. Not only does Tiresias infuriate and insult Oedipus, he reveals a small fraction of the truth to Oedipus. Dramatic irony is shown in this part, as the Tiresias mocks Oedipus’ sight by explaining that he cannot see the truth corrupting his life. However, Tiresias is still tormenting Oedipus with the truth. When he says, “who are your parents? Do you know?” Tiresias is taunting Oedipus because he knows the truth behind the questions and Oedipus doesn’t, revealing a sense of power. By saying, “Do you know?” after his previous question, Tiresias emphasizes the idea that Oedipus is clueless and he uses this repeated question to anger him. When Oedipus responds to Tiresias’ insulting demeanor he once again reveals his anger through frustration. He shouts out, “Enough!” which clearly expresses that he is unable and does not want to hear anything bad about himself and cannot handle the anger that boils him up. When he says for Tiresias to “vanish!” he seems to have no idea how to act accordingly and properly voice his thoughts. Filled with pride, Oedipus assumes that everyone will do what he says, and is angered quickly when people don’t. 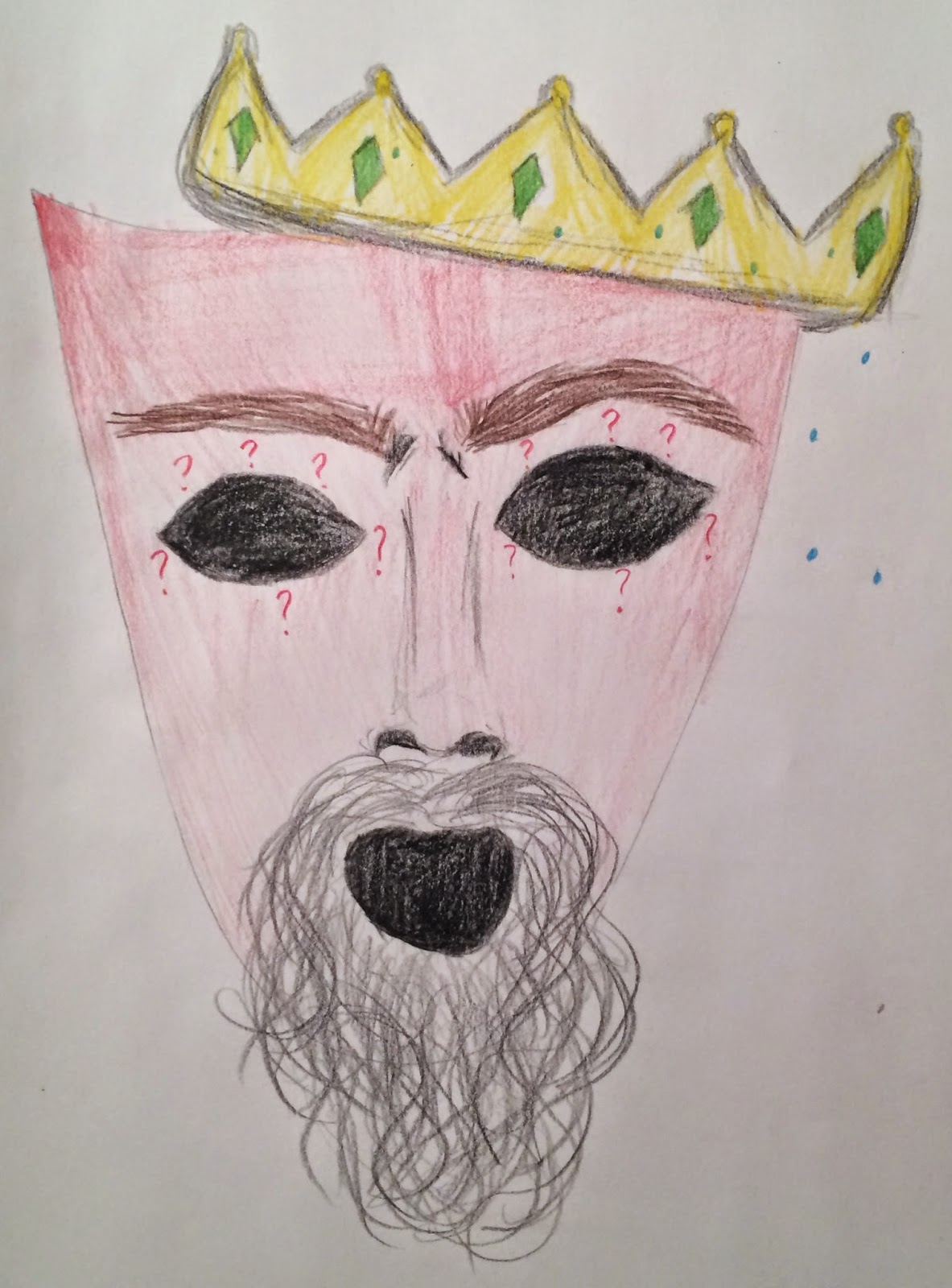 This is Oedipus’ collapse as a powerful King, a father and a human. From once getting what he wanted by stating it, to now begging for it. Creon, a man that Oedipus despised for threatening his rule as King, now rules over Oedipus because, the truth about Oedipus’ past was revealed and ultimately destroyed his rule and reputation. Phrases such as “pity them”, “only hope”, “promise me”, “noble Creon” all convey a sense of sadness and hope. Oedipus expresses his sorrow as he pleads for Creon to provide his children well being. Oedipus argues that they are Creon’s “own flesh and blood” believing that Creon will look after the children because they are “so young” and blood related. However, it seems as though Creon is more disgusted than he is pitiful. This is shown when Creon “draws back” from Oedipus’ reach. This act symbolizes that Oedipus is alone; there is no one to help him now. 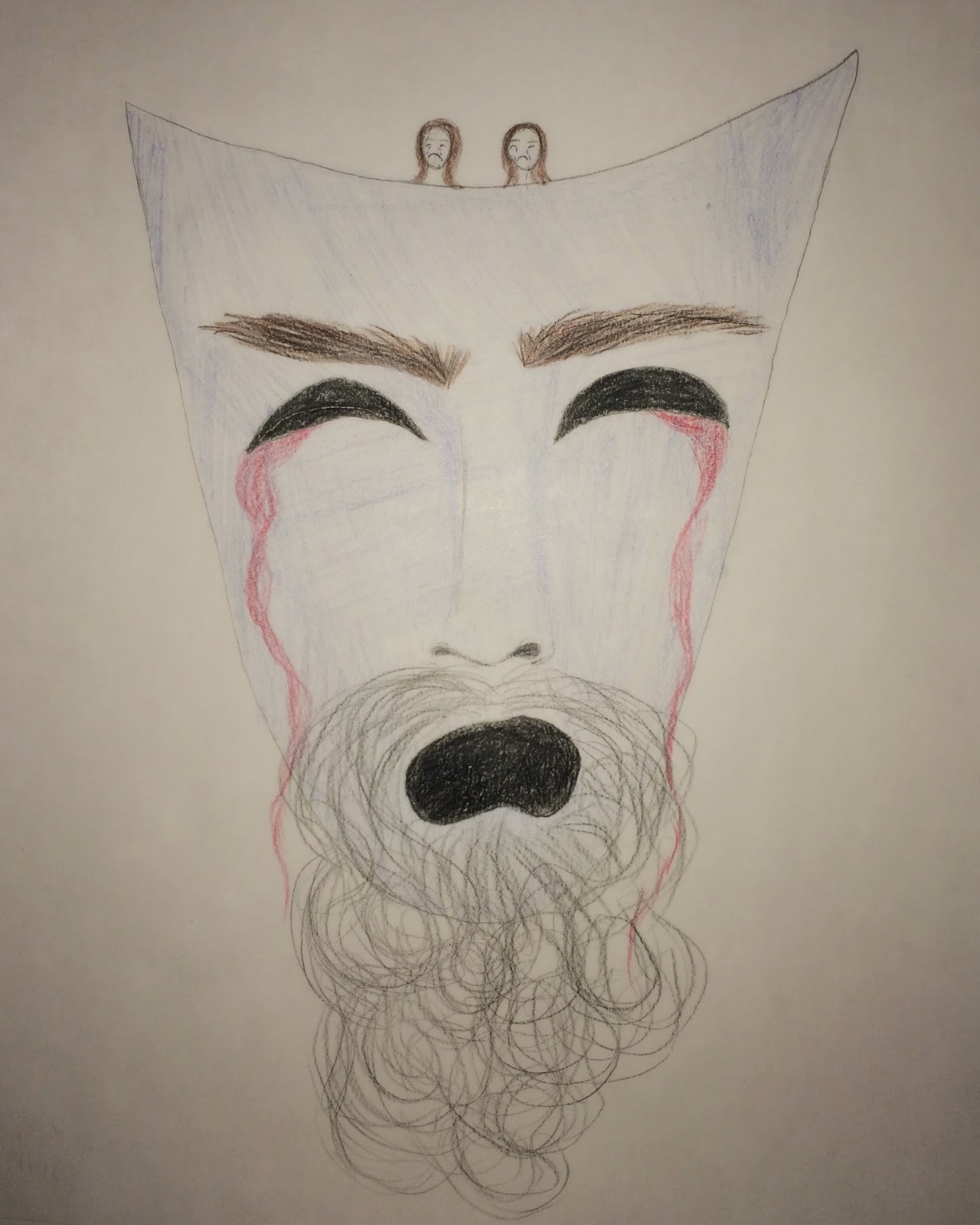